I am urging everyone to vote on Tuesday.  I know some of these guys are not worthy and it is hard to tell one from the other in many cases.  Don't let the bad guys win (on both sides) by not voting.  If you are in any one of many polarized groups I'm sure you know who you're going to vote for.  If not, and you still want to do some fact checking, a good website to check out.


They appear to be neutral and give you a quick glimpse of what people have said and given each statement a rating of true, mostly true, half true, half false, mostly false, false or liar, liar pants on fire.

It's quick, easy and to the point.  A Pulitzer Prize winning website.  Go for it.

Here's a link to my previous post on the election.
http://lynncrawfordsays.blogspot.com/2010/10/only-13-more-days-to-endure-this.html

I haven't updated you on Sid, Sally, Saul and Sam since the the end of August.  So much has happened since then that I'm not sure where to start.  Okay - Sally finally took the plunge and moved over to Sid's window.  She didn't entirely abandon her web, but spent less and less time there.  Sam and Saul moved downstairs to another pane and continued to live a pretty sedentary life. 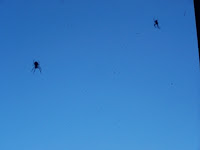 I noticed that Sid was spending more and more time away from his original web, leaving Sally alone a lot.  She continued  to maintain both webs.  One day, I spotted Sid on the window in the den - pretty far north from his home.  The fact that this coincided with the start of football season is not unimportant.  The TV set is in the den and it only makes sense that Sid would be a football junkie, given his other macho traits.

Occasionally he 'd go back south to his home, where Sally bravely tried to keep him happy without the TV and the NFL.  Saul and Sam had become restless and moved around between the first floor of their two flat to Sid and Sally's second floor space.  From time to time, they'd join Sam at the den window - but I suspect they were more NASCAR than NFL and NASCAR will never show itself on our TV screen, except by accident when we are channel surfing.


One day they just picked up and moved to the farthest south window of the living room.  I think they spent most of their time sulking.  Once or twice I saw Sally run over there to check on them. Her maternal instincts still in tact, in spite of the way she was being treated by Sid.  Pretty soon Sally started losing interest in her own web.  Neglected, it started to shrink and the entrapped gnats and such started dropping away - the food source was disappearing - not a good sign.  With Sid gone most of the time and Saul and Sam acting sour and sullen, Sally was losing her spirit.  One day she left in the morning and instead of coming back after the midday sun was gone she simply flew away. 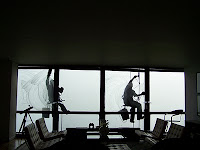 I don't know if she found a new love, or moved in with some girlfriends or simply knew that these guys were coming and this time they meant business.  In any event - she must not have warned the others.  They were still there on the morning of the window washing.  After the window washers left, I waited a day or two for Sid, Saul and Sam to return. as they had done the last time.   They didn't.  Winter will be upon us soon and the lake will not bless us with any more spiders until next year.  I hope that wherever Sid, Sally, Saul and Sam are that they are happy.  They provided us with months of fun watching them.  Look out for them on a window pane near you.  Every time you see a fake spiderweb in someones Halloween decorations - think of Sid and his friends.  I know I will.
Posted by LSC at 10:12 AM 1 comments

Get these damn elections over with in Illinois.  Don't our Illinois candidates realize that most of us have stopped listening and watching and reading? At this point, they are pouring their advertising dollars down a rat hole.  We've been subjected to this since right after Labor Day and before I stopped listening and watching I didn't hear one positive message or one practical solution to any of our problems.  And don't they realize how much name recognition they're giving their opponents? I do intend to vote because it is our right, our privilege and our duty.  How will I choose?
Do I vote for the honest incompetent or he slick shady one?
How about it- the liar or the loser?
Then there is the proven crook vs. the smoke and mirrors "reformer". 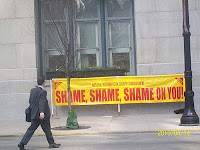 Maybe I'll vote for anyone:
Or I could just blindfold myself and point the pen where it wants to go.  We need a more civilized way of choosing our elected officials.  9 months is a nice time frame for having a baby.  It is waaaaaay too long to have between a primary and a general election. And Joe citizen should not be "electing" our judges.  By the way, in the judicial races I always vote for women.  On the  retention of judges I always vote "no".
I think you get the idea.  The only winners in these races are the ad agencies and the television stations.  As usual, we, the voters in Illinois are the losers.
Posted by LSC at 5:20 PM 6 comments

It's Dangerous Out There

I took a walk to and from the hair salon today for a haircut.  It is only 8 blocks round trip.  My favorite doorman, Carlos, at the Drake,  gave me a hug and told me to be careful as he always does.  What can happen in 8 blocks?  Plenty.  I was sideswiped by a bicycle, scared out of my wits by a guy running a red light at Walton and Michigan, almost knocked over by a band of teens walking 5 abreast and whacked with a fast moving revolving door.  I ranted enough about this last spring - so I won't bore you with a repeat.  In case you didn't read my post last April, I've provided the link.

I'm going to keep Carlos' words in my head everytime I head out now. I'm on my way to Fed Ex right now.  Let's see if I make it back alive.

I enrolled in Food Writing at the Newberry this semester. Why not? I like to write. I like to eat. I walked in expecting the usual over the hill group that gravitates to the Newberry Seminars. One by one, my classmates arrived. Not one of them was as old as some of the shoes in my closet. “Oh no,” I thought. “Kids younger than mine. What have I gotten myself into?” As it turns out – I  had gotten myself into a wonderful class.


Our instructors are engaging and eager to share their considerable knowledge of the culinary arts and food writing. They are determined that we have fun. Day one we were treated to a crispy, crunchy, succulent, melt- in- your- mouth, double baked almond croissant from the pastry chef at Fox and Obel. My classmates wrote stories about the croissants that revealed their personalities and some of their life stories. " Hmmm,” I thought. “20 –somethings who are literate, passionate and not self absorbed? This is promising." 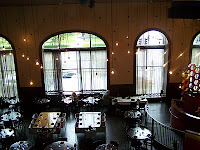 Class two was a field trip to Mercat a la Planxa, the Catalan restaurant in the Blackstone Hotel. Ethel and Stephen had prepared us with a review of the geography, cuisine and culture of Catalonia and some culinary terms we’d encounter. What they couldn’t have prepared us for was the bright vibes of the décor, the warmth of the staff, as youthful as my classmates, and the nervous but gracious service. Then there was the food. 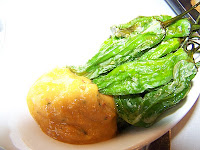 They had me at Pimientos de Padron, flash fried peppers with a Salbixada sauce, a blend of almonds, garlic, tomatoes, parsley, oil, vinegar and bixto pepper.  Creamy, dreamy – hit me again. And again. And again. The cheese was served with bacon sherry caramel followed by bacon wrapped, Marcona almond stuffed dates. A double bacon treat.
Next were perfectly prepared and presented diver scallops, a spinach dish from heaven and chorizo brochettes that I could have lived without. We all , with a couple of exceptions, salivated over and devoured Croquettes de Xocolate for dessert. 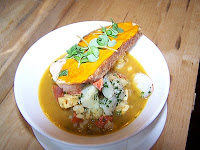 The star of the show, according to my taste buds, was Arroz a la Cazuela.  Accomplished Sous Chef, Cory Morris created this orgasmic combination of saffron broth, shrimp, chicken, chorizo, artichokes and short grained rice tableside. At 29 he fit in perfectly with the mostly youthful group around our table. No pretension, no formal training, and no delusions of grandeur – he spoke with pride in what he does and who he works for. Sure, he’d love to be a sous chef for Jose Garces on Iron Chef or compete himself. But yeah, he eats frozen pizza and drinks Pepsi when he ends his 18 hour day. He would love to run a small lodge in Montana and serve the fish he catches. He - and my classmates - seem to have their priorities straight. 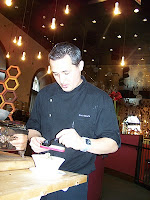 There is hope for the future. In this case, youth is not wasted on the young.
They get it.

When we moved to Illinois in 1974 I became an avid reader of the Chicago Tribune.  It was the information source I used to turn myself  from a Jersey Girl into a Chicagoan .  I loved the Metro section that featured our west suburban village, but I also loved the sections that guided me through the arts, sports and business that I needed  to figure out the landscape of my new home.

Over the years I also became an advertiser in the Trib - to rent my vacation home in Arizona and on behalf of the company I worked for.  I always got good results.  It was a really good name and people respected it.  Think -Arthur Andersen, FWWoolworth , TWA, Madigans, Schwinn, Continental Bank and Wieboldts.
During my exciting career I didn't spend much time analyzing the Trib - I just read what I could during my commute to work - especially the business pages and commentary and checked the ads we had placed.  I loved the Sunday Section with Rick Kogan and the wonderful writing of Leah Eskin.  I grabbed it first from the pile of papers on the counter.
A few years before I retired in 2008 I noticed that I was not enjoying the Trib as much as I used to and attributed it to my own cynicism and advanced  level of Chicago knowledge.   My  husband had told me of his waning interest  - but I attributed it to male stupidity and adverse spousal opinion.   Turned out he was way ahead of me.
I've expressed my opinion many times now on the subject of the demise of the Tribune, including a letter I wrote  to Sam Zell a few years back suggesting he sell the Trib and keep the Cubs - because at least with the Cubs you get beer.   Nothing, however, broke my heart like this article from today's New York Times which makes me ashamed to be a subscriber and removes forever any awe I had for Tribune Tower itself.
http://www.nytimes.com/2010/10/06/business/media/06tribune.html?_r=1
Is this what journalism has come to?  Stop the world, I want to get off.
Posted by LSC at 1:35 AM 0 comments