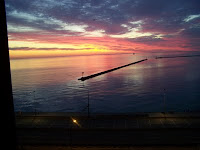 This crazy world stands still for a few hours every July 4th.  Actually it doesn't stand still as much as it goes back in time.  This spectacular sunrise lived up to its promise of a beautiful day.  Off we went, as we have for many years to the Chicago History Museum.  You may remember it as the Chicago Historical Society.  Volunteers with programs and little American flags greet us in the east plaza of the Museum.  Hundreds of Chicagoans and visitors of all backgrounds and ages have gathered here for 52 years to  experience an old fashioned 4th of July.
As the children prepare themselves with painted faces and lots of beads for the parade, led by the worlds tallest Uncle Sam, the adults are treated not only to patriotic music by a real live orchestra, but also renderings by Cole Porter, George M. Cohan and a wide array of old time familiar music.  I love that the kids are being introduced to some of the oldies but goodies. 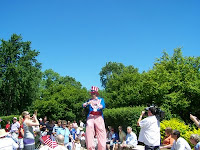 The Childrens' Parade is a real family affair, with moms, dads, grandparents and even dogs joining in the action.  Our Uncle Sam mingles with the kids and even jumps rope as though he wasn't on stilts.  I admire the parents who are setting an example of patriotism for their little ones.  I hope it sticks.

After the parade is the "meat" of the program.  The posting of colors, this year by an honor guard of the American Veterans for Equal Rights (AVER)..  After the introduction of the dignitaries on the dais and the reciting of the Pledge of Allegiance and singing (yes - the crowd knows the words) of the National Anthem,  the entire Declaration of Independence is read.  This year, by Jim Darby, president of AVER.  He did a great job  - it is not an easy piece to read with the elaborate language of the day in 1776. 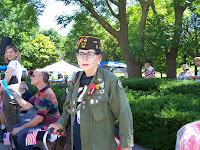 The anthem of all the branches of the U.S. Military are played one by one as the veterans of each of those who served are asked to stand and be recognized.  I never get a picture of my husband, served in the Air Force, because I'm sitting next to him.  Maybe next year.  I did get this picture of a stunning female Naval Veteran of Vietnam, who served on a munitions ship for several years and is a proud VFW member.

There are many teary eyes as this part of the program is in progress, mine included.  We really do owe a debt to our U.S. Servicemen and Women.   It is they who preserve our right to gather and express ourselves freely.  Thank you.

As in the old days, an elected official is asked to deliver a keynote oration.  This year's was ably presented by a relatively new U.S. Representative from Illinois, Mike Quigley.  I must say I was impressed with his words, and also his humorous look into the U.S. House.  I think he will serve his constituents well. 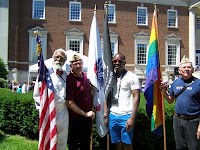 Most impressive is the retiring of the colors-  lots of pomp and circumstance and pride in carrying a variety of banners.  The finale is a  reenactment of the Bess Brown musket firing  by the King's Regiment, Eighth of Foot. The Brits are unceremoniously whisked off the podium and the crowd is invited to tour the museum free of charge.

This experience is well worth the effort to get over there.  Put it on your calendar for next year, you won't regret it.
www..chicagohistory.org 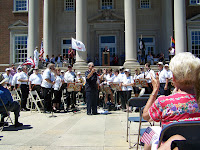