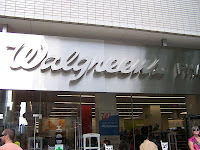 Technology is amazing.  The electronic voice instructed me to" Please proceed to register 8."  I did as I was told.  I unloaded the contents of my basket onto the counter.  The young, artistically tattooed cashier started scanning my $80.52 worth of items and bagging them.  All this while engaging in a lively and flirtatious conversation (gripe session) with the young, artistically pierced cashier at register 7.  I swiped my credit card, followed the prompts, signed the box, picked up my three expertly balanced bags and proceeded to the exit.  There was no eye contact, no "hello", no "goodbye", no "Thank you for shopping at Walgreens," 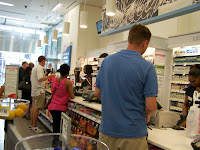 Next time, I''m not going to do what I'm told.  I'm going to wait for register 1 where a gentle, older woman -with a sparkle in her eye and who works from a seated position,  will greet me, engage in conversation and thank me sincerely.  It may take a minute longer than register 8, but I'll feel better and hopefully, so will she.
Posted by LSC at 12:41 PM 1 comments

Faith Restored - In The Lyric Opera And Mankind 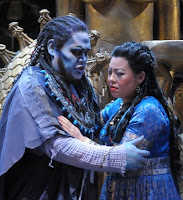 After leaving a breathtaking and mostly perfect Aida at the Lyric, we jumped on the #20 bus to Michigan Avenue.  The crowd at the bus stop was bigger than usual.  The bus, which is usually empty, was packed.

The crowd on the curb waiting for the bus were geezers with Aida programs.  The packed masses on the bus were 20 somethings from all races, ethnic groups and fashion groups. Some were coming from the Hawks game, some probably from work or other activities.

As  the geezers started to enter the bus, the 20 somethings started jumping up out of their seats to give them to us.

I used to say, "thanks, but it's a short trip."  Now I say, "thank you and thank your mother for raising you the right way. 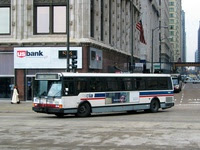 Chicago's young people.  Admired.
Posted by LSC at 12:32 AM 1 comments

Rinaldo - Skip The Opera - Listen At Home - Better Yet, Take The Bus.

We have never left the opera early.  Not until last week.  Rinaldo by Handel.  Beautiful music at times.
Act One:

Repetitive, very Handel-like.  Sort of like an organ recital with costumes and special effects.
Can't appreciate counter tenor voices.  Everyone sounded alike - men and women - come to think of it they looked alike too.
Intermission One:
Decided over champagne that we'd leave at the second intermission.
Act Two:
Finally, some action and some male voices - well, one bass voice.  A superb vocal and dramatic  performance by Elsa Van Den Heever as the evil Armida ended with a bang.  Really, a bang.

It almost made us change our minds about leaving at intermission. Well, almost.
Intermission Two:
We left.  Walking into the balmy Chicago air.  Yes, balmy.

Act Three:
The #146 bus home.
Stage right. Obese Lesbian couple PDA being observed by a Judgemental Geezer in a suit with a chamber music program in his pocket. An old fart hitting on a young woman with crutches.
Stage left.  No English spoken here VERY LOUDLY. 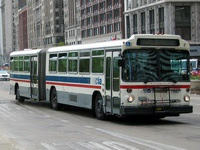 Center stage.  Frantic woman with suitcase madly searching for something in her purse all the way up Michigan Avenue.  Bicycle messenger not able to load his bike without help from driver.
Hmmmm.  I see an Opera in this bus drama.  Really, see what we'd have missed if we had walked.  Really.
Skip Rinaldo and take a bus ride.
Posted by LSC at 5:30 PM 0 comments