Occupy Chicago - A Horse of a Different Color 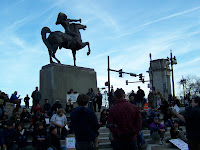 One Sunday in November, before we left Chicago, I wandered down to Grant Park.  Well I didn't exactly wander.  I went there purposely, seeking the Chicago Occupiers, who gather  by the horse statue in Congress Plaza.  Actually, the statue depicted is The Bowman, one of two bronze statues installed in 1928 and created by Ivan Mestrovic.  The other is called The Spearman and both were commissioned to honor Native Americans.  If I had trusted the media, I would have been wary of an unruly mob.  Having visited with the Occupiers at Jackson and LaSalle, I knew better, but wasn't sure if they had continued to maintain their cool.

What ensued was a lot less rowdy than some  high school graduations I've attended.  They had a speaker, a well known university professor, who is an expert in housing.  As she spoke, through a portable megaphone, the crowd reacted not with loud cheers and boos - but by raising their hands and wiggling their fingers - a silent yeah or nay.  Speakers from the crowd were given the opportunity to respond, or add, to the speaker's remarks.  Everyone was respectful of the platform and the other speakers.  I closed my eyes and pictured these folks in suits and ties and I was back in an educational seminar at work.  What?

I had a lengthy conversation with a very young woman and a man older than I am.  I asked why the media hadn't picked up on the peaceful nature of the Chicago group - as they had the lawlessness and confrontational nature of groups in other cities.  This time, I was quoted from Gandhi.  I hope I don't  mess this up, but I failed to write it down.  Something like..."First they ignore  you, then they laugh at you, then they fight you and then you win."

They had games and artsy activities for children and a big chalk drawn sign saying "Keep Your Kids Occupied".  They claim to have no leaders, but the whole thing was so damn organized that I find it hard to believe.  If you think they're not organized, check out their website  http://occupychi.org/
Their calendar abounds in educational events as well as action oriented gatherings.  It's not just about corporate greed any more. 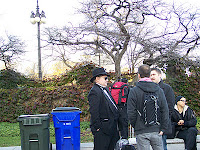 I asked if they had a problem with the homeless joining in and creating disturbances as they have in other cities.   They said they welcome everyone.  They also said when they do encounter the mentally ill or addicted homeless, they deliver them to where they can get help.   I didn't see any out of control, or obviously homeless people.  The crowd is still pretty diverse and seems to be growing.

I'm sitting here in Tucson reading the New York Times recap of the arrests and evictions in  places like Atlanta, Boston, Burlington, Vt., Denver, L.A., Oakland, Portland, Ore., Salt Lake City and St. Louis.  I am hoping that the Chicago Occupiers are staying on higher ground and sticking to their theories of peace and inclusion.   On the other hand, I hope  they don't get too corporate.  They may succumb to the things they claim to protest.
Posted by LSC at 10:23 AM 1 comments

Ants In My Pants - Annoying Debate

I usually sit through every minute of each debate to catch every last word and gesture.  Last night I found myself making excuses to leave the room, as though I had ants in my pants.  I don't think I missed much on my forays into  other rooms.  If I missed anything "juicy" I'm sure I'll read or hear about it. A number of things really annoyed me.

The set itself, with the eye-popping red in dominance was a huge distraction.  It was good to see John Harwood and Maria Bartiromo -but give me a break- Jim Cramer? 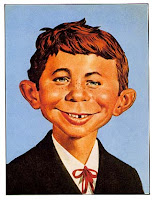 Not only is he mostly wrong about the economy, but also his shouting drove me into the kitchen for a glass of wine.  Keep him out of my house.


To top it off, in every screen shot of him was a face, over his shoulder, of a dead ringer for Alfred E. Neuman.  That may have typified the annoying audience who booed Maria's questioning of Cain and cheered  Cain's response on the harrassment accusations.  While I know the only topic that was promised to be covered was the economy, I hope audience reaction isn't typical of how America views harrassment in general.


Some old annoying phrases: flat tax, obamacare, 9-9-9, repeal, do away with, Obama failure.

Funny moment:  Newt vs. the media - he clearly is the smartest guy on the stage.

Sad moment:     Poor Rick Perry - I wanted to hug him, but only in the spiritual sense.

The expected:
The unexpected:

Oh and did I mention the most annoying thing of all?  Try concentrating on the speakers with the stock market quotes crawling across the bottom of the screen and all those bright red down pointing arrows.

Thumbs down on this debate. I don't want to have lunch with any of them this week.
Posted by LSC at 3:23 PM 0 comments

Occupy Chicago - A Picture of Diversity 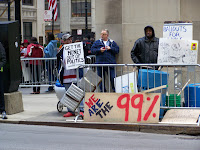 I'm not sure if it is truly diversity or a case of protest schizophrenia. On a fine October day I decided to go to the  Occupy Chicago meeting place, where the Board of Trade sits opposite the Chicago Federal Reserve Bank, to see for myself.  The group was small - under 100 people- and clearly diverse in terms of age, ethnicity and walk of life.  Deciding not to judge a book by its cover, I approached several in the group to ask why they were there and to what end.  I suggested to a woman about my age, dressed in a stunning, expensive outfit, that I wasn't able to sort out the major theme.  She responded by handing me a fresh- off- the- press flier stating that the one message should be campaign finance reform.  It condems Citizens United and cites numerous elections that have been "bought" by that group and other special interest groups consisting of wealthy corporations and especially financial institutions. 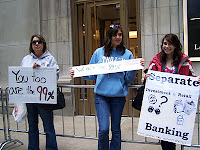 I then approached two young women who could have been my granddaughters.  One turned out to be a  high school student - done for the day - and the other a college student who didn't have class until 4:00.  I asked them what the 99% means. The high school student cited Marx- that in the worst economic times the 99% control 1% of the the wealth and vice versa.  I am not a reader of Marx. The only similar quote I found on Google was during the Gore/Bush debates in 2000.   I was impressed that a  high school student was articulate and even knew the name Karl Marx.  They also said they were tired of banks charging them money to use their money and the fact that jobs are scarce. 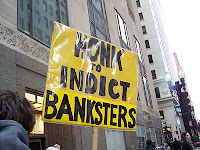 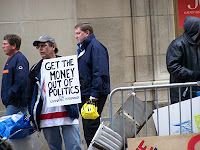 The group was having a good time, being respectful to the police and the passersby, and for the most part sincere.  I suspect the employees of the Ann Taylor shop behind the insessant drumming were also sincere in their anger.  There were a few colorful weirdo people and lot of colorful signs.    Interesting to note that most of the people who honked  to "Indict Banksters" were driving cabs and buses.

I'm still not sure what they're all about - but they are surely not the great homeless, lawless, unwashed mob that seems to have infiltrated  Occupy groups in other cities.  For once, The Chicago Way is a good way.
Posted by LSC at 2:11 PM 0 comments