Before we left Chicago I was fortunate enough to get a front and center seat at Mayor Richard M. Daley's last City Council meeting on May 4, 2011. Hizzoner actual stayed at the podium for the entire meeting -  an historical first.

There were the usual resolutions honoring Fire, Police and CPA standouts and the droning of the various ordinances and Eddie Burke's blah..blah..blah. Then the whole thing turned into a 2 hour love fest, not only for the departing Mayor, but also the Aldermen who were leaving because of retirement or losing a runoff election.

The Mayor also gave high praise to the outgoing City Clerk, my friend, Miguel del Valle. He has conducted his personal and public life with honor, integrity and a real desire to help young people achieve success through education. In the 30 plus years I have known him - I have witnessed the respect that he shows others even when the "others" are throwing bricks and not being civil. Today I salute him for bringing the Chicago City Council, kicking and screaming , into the 21st century in terms of technology. His redesign of the City Council website and its interactive nature -especially for the live streaming City Council meetings- allowed me to watch the new Mayor in action.﻿﻿ 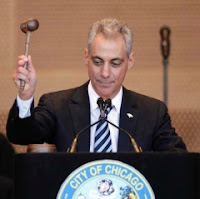 Last Wednesday, sitting in my PJs in Tucson, where it is two hours earlier, I was able to sip my tea and watch and listen to the first meeting conducted by newly inaugurated Mayor Rahm Emmanuel. In spite of several long resolutions for Police and Fire personnel and for the 30 plus Jr. ROTC scholars from the CPS high schools and, yes, the blah..blah..blah from the Finance Chairman - they managed to bring the meeting to an end in under two hours. I still think the new Mayor needs to make some improvements to the meetings and the new President Pro-Tem, Alderman Harris will help do that. She called the Chamber to order several times - something that is badly needed to curb the A.D.D. behavior of the body , mentioned in an earlier post
http://lynncrawfordsays.blogspot.com/2011/03/rahm-can-fix-it-city-council-meetings.html
For both his many years of honest public service and his opening the window into Chicago city government, my sincere thanks to Miguel del Valle.  I'm sure we will hear more from him in the future. 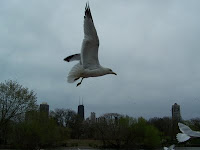 Long story short:  I make my own Melba toast - so after a few months I have a freezer full of skinny little bread crusts.  I don't make my own bread crumbs or croutons and I refuse to throw good food out.  Enter the ducks.  I drag Joe yelling and screaming onto the #151 and head for the lagoon in Lincoln Park to feed the ducks.  When we get there he enjoys it so much that he hogs the bags of bread crusts and I just wander around taking pictures. 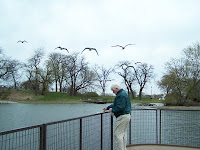 This trip the geese and seagulls seemed to outnumber the ducks.  We discovered a pecking order.  There is a "head" goose who shoos the others away until he is sated.  The seagulls are afraid of the geese and will not try to steal from them, but hover anxiously hoping for leftover crumbs.  And then there are the ducks - they are afraid of both the geese and the seagulls, so when we find some ducks and target them for a treat the seagulls dive in and scare them away.  They stay away from the geese as well.  I don't particularly want to feed seagulls so we try to outsmart them.  They have a communication system that alerts the entire seagull population to the bread brigade.  Darn!  By the time we find some ducks alone we are out of bread.

We wondered at the scarcity of ducks in the lagoon, but as we crossed over into the zoo we found them in the waterfowl pond, happy as clams eating whatever ducks eat naturally without the need of our bread. I guess I'll start making breadcrumbs and let all the birds eat local and natural - especially now that the new nature boardwalk has a food chain built in. 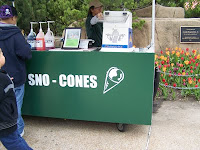 While wandering around on the first day with parka-less people, the size and shape of our citizens became apparent.   Overweight and obese people were about 1 of 6 in adults and 3 of 6 in children.  This was not a scientific poll - simply fundamental research done with my eyes.  I think I know why.  While the geese and the seagulls were frenzied about our bread, the human visitors were also partaking in a frenzy of their own.  Pictures speak louder than words.  Come on, parents - your kids will never soar like an eagle carrying all that belly fat around.

You are in walking distance of the Green City Market which opened outdoors today.  Take the kids there on the way to the zoo so they're full of good stuff and not as tempted by the ring of food carts in the mall by the childrens' zoo and the sea lions.   Give it a try. 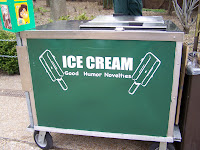 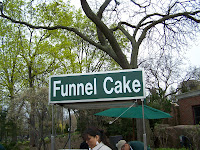 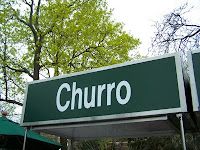