Looking In The Rearview Mirror From 2013

One hundred years ago both of my parents were born.  If they had been here in 2013 we'd have had one big party.  Sadly, many of their peers and siblings would not have been around to celebrate with us.

Fifty years ago I experienced two big losses.  My father died of Camel cigarettes and airplane fumes.  He worked for American Airlines right out of high school.  They were flying prop planes back then.  I remember flying in them.  Imagine all the things we take for granted today that he never 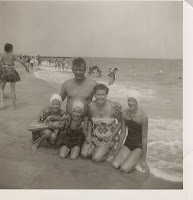 experienced or knew about.  Two of my children have now lived longer than my dad.  He would have loved all the grandkids.......our place in Arizona.....and Patsy and Jan's beaches.

We also lost the first president for whom I was able to vote.  I remember sitting in my college dorm watching the debates (they were pretty civilized back then.)  He was the one who inspired me to get active in politics.   I thought of him when I canvassed for Obama in Iowa a few years go.  I also remember the day he was killed.  We lived in a Quonset hut on campus with no television or telephone.  Joe was at work at one of his many jobs and when he showed up at home in the middle of the day I knew it was not good.

We high tailed it out to Grandpa Jack's and stayed glued to the television for hours (actually days.)

Nineteen years ago I lost my mother.  I can't tell you how many times over those years I have reached for the phone to share some news with her.  I regret the times I made fun of her for watching Golden Girls - little did I know I'd grow to love them too.  She would be so proud of all of her ten grandchildren.  They were a big part of her life, and she theirs.  I still use her wooden spoon and her teapot and we all use her mother's pierogi recipe that she shared with us.  Christmas always brings her to mind.  Nobody could eat enough to make her happy.  I think she'd be satisfied on that point in 2013.

Five years ago I retired from a job that I had loved for  30 years.  I miss most of the people I worked with, resent the last boss I had who made my decision to retire easy, and stay in touch with many of the colleagues who enriched my life.  Retirement is great.  Never bored, no regrets and many thanks to the hard working people who worked for me and made me look good.

We have had many joys and losses during this year, as well.  When I look back at the end of 2014, I hope it will hold more joys than losses.  I wish only good health and happiness to my family and friends.  A little bit more peace on earth, a lot more sanity in Washington, a lot less crime in my city.  Most of all - may we all wake up breathing each morning and just be nice to each other.