The Maestro, The Musicians, The Geezer 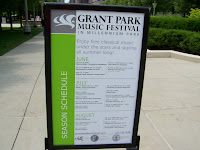 We are members of the Grant Park Music Festival.  Bad weather has kept us away from the Pritzker Pavilion in Millennium Park since the season began.  The show goes on - rain or shine - but we lack the spirit of adventure that used to propel us through the rain and wind and hope it clears up. 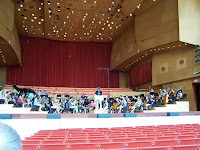 Tuesday was a gorgeous day - so we packed a lunch and headed for the pavilion, where an open rehearsal was taking place for 2 1/2 hours.  It is a relaxing and fun way to spend a lunch hour and we kind of feel like insiders, since we get to see Carlos Kalmar, the principal conductor, in a t-shirt and sweatpants instead of his usual formal attire.

What a treat to see these classical musicians in their shorts and flip flops - as they react to Carlos' direction and lively correction - it  really humanizes them and him.  You can see the affection he has for "his" musicians.  Although the orchestra spots are highly coveted and the few openings every year attract hundreds of  top performers from all over the country, no one is chosen for a position until a final decision by Maestro Kalmar. It appears that the affection is mutual. During their union mandated breaks - a union official  actually comes on stage and calls a halt - the camaraderie is evident and the exchanges are clearly two- way.

The music was a tour of  Latin America with works from Mexico, Argentina and Brazil. Some very tense and dramatic passages which required concentration on the part of the orchestra and focused attention from the audience.  Two young nannies with their charges came and sat near us.  I was prepared for childish prattle as a disturbance to the music.  In stead these little darlings listened and tapped along and one of them silently imitated the hand movements of the conductor.

Just as the Villa Lobos' work about the enchanted Brazilian Bird drew to a powerful silence to be followed by an even more powerful ending, we heard from behind us- "YEAH, HELLO.  CAN YOU HEAR ME?  CAN YOU HEAR THE MUSIC? I'M AT THE SYMPHONY.  NO I DON'T NEED ANY OF THAT TODAY - BLAH-BLAH-BLAH-BLAH AND I'LL CALL YOU TOMORROW.

I hope the old geezer who interrupted the music isn't at the Art Institute tomorrow when he calls his friend back.  What is is that they say?  ...and a little child shall lead them. 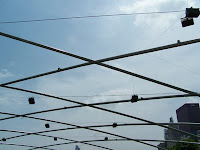 I highly recommend the open rehearsals and the actual performances,  which are posted on the web site

With any luck the audience will be filled with music lovers, not geezers with cell phones.
Posted by LSC at 4:58 PM 0 comments

Your Honor, Mr. Mayor: How Many City Workers Does it Take to Change a Light Bulb?

I promised to use the respectful term for our mayor after his election.  Thus the title of today's post after having observed the changing of the light bulbs on Lake Shore Drive yesterday. 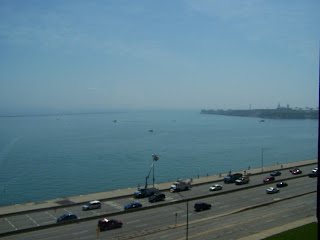 Not sure how many workers there were - but there were 5 vehicles of varying sizes.  I'll assume they each had a driver.  Then there was the guy who put out the cones in front and back of the caravan and the guy who actually went up in the cherry picker.  I want to bet on 10 guys.  Saturday wages, mid day traffic disruption.  I know it's important to keep the streetlights lit.  Just wondering why the one that has been lit for about 3 years, 24 hours a day, that I reported 3 times was never fixed.  Just wondering.

I think we need an army of taxpayers with cameras out there keeping tabs on how our dollars are being spent.  Rahm - I mean His Honor- can't be everywhere after all.
Posted by LSC at 1:49 PM 0 comments

Ever Wonder Where That Copper Comes From? 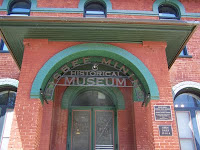 Bisbee. Arizona, founded in 1880, is a town in the Mule Mountains, about 80 miles south of Tucson, that has reinvented itself.  Once rich in not only copper, but gold and silver, Bisbee was a thriving mining community for Phelps Dodge up until the 1950s when the boom bombed because of the end of WWII  and its demand for copper.  The town, however, did not die like so many others.  Thanks to continued underground work and open pit mining, it continued to survive, if not thrive, until the Copper Queen Mine was closed in 1975.  The exodus of mine workers caused real estate prices to drop to the point that artists, who loved the quaint architecture and the beautiful natural surroundings, were able to relocate there. 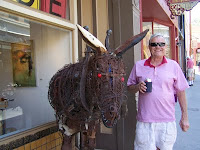 With the help of Phelps Dodge the town fathers created the Queen Mine Tour, which has given over a million visitors a first hand experience at descending into a copper mine.  The narrow, hilly streets are lined with art galleries and the inevitable tourist trap gift shops, but not to excess.  We found this mule sculpture made of all sorts of wire and discarded parts of cars and machinery on Main Street (what else?)  The artist was there to greet us, but since his t-shirts were $49.95 we didn't ask the price of the sculptures. 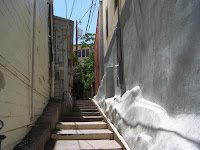 The Copper Queen Hotel is central to the town and maintains that old west/mining town atmosphere.  We took a pass on the dark old wooden bar as it had been commandeered by some traveling bikers.  Instead we walked over to the Old Bisbee Brewing Company for a sampler of their seven brews - all very good.  Great menu - just beer and beer cooked bratwurst and for the "fancy schmancy" folks a red or a white wine.  Plenty of free popcorn too.  I loved looking up all the alleys as we walked around the winding streets.  I expected an old prospector to come out with his pick ax (or whatever) in his gnarly, copper colored hand. 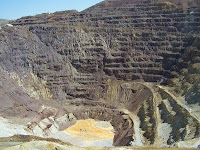 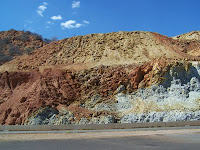 The highlight of the day for me was our visit to the Lavendar Pit.  No, it is not lavender in color, but named for an VP and General Manager at Phelps Dodge who conceived the idea of using this method of making low grade copper profitable.  Its  900 foot deep ugliness is almost beautiful and the roadside cliffs across the highway paint a picture of the multiple riches out there in dem, dere hills. Quite a worthwhile trip.

Comcast, AT&T, Best Buy, etc..  Whenever I have to call any of these - I hyperventilate, picture failure, prepare to talk a foreigner out of using a script and ask my husband to have a stiff drink ready for me when I get off the phone in 2-+ hours.

What is happening?  I call Comcast.  Our new TV only shows purple and green.  I expect another not helpful encounter with a far east call center employee. I get a real person (in person) who is not only fluent in English, but lives in our community.  He fixes the problem, refuses a tip and gives us his personal cell phone number.  It was a simple problem, but he doesn't look down on us as stupid seniors.

We buy a new computer and all the data transfers successfully except Joe's e-mail.  He has SBCglobal.net which has been incorporated into ATT and Yahoo.   After a million on-line tries. including a call to our own personal Geek Squad, our son, we call the 877 number on the website.  Voila - we get David Jones (aka Dakil Patel, I'm  sure).  He was so helpful, not on script, listened to me and ACTUALLY SOLVED THE PROBLEM. I wish I knew his real identity so I could tell ATT to hire more people like him. The Geek Squad really let us down and we suspect "bait and switch" and a little bit of incompetence.  What the hell.  We still have our son, and if we were in Chicago, not Tucson it may have been different. I'm sure he's glad to not be our main helpdesk.
Two out of three is not bad.
I'm buying a lottery ticket with the ID number given to me by AT&T.  And...............I'm having that stiff drink to celebrate improved customer service at Comcast and AT&T.  Love it.
Posted by LSC at 11:28 AM 0 comments