For most of my formative years I was a disorganized procrastinator. Nothing really tragic happened - but enough "oh no!" moments - like carryin

g the American Express bill around in my purse for a month so when Joe went to buy me a birthday present - they took the card. I'm sure I caused some awkward moments for my kids, as well, with missed permission slips, forgetting the day of class pictures and others that I'm sure they'd love to share.


When I started working I thought I could carry all my deadlines and duties around in my head, and for a while it worked. As my responsibilities grew and I became more involved in the community, I knew the mental calendar was going to lead to disaster - not being where I needed to be or missing an important deadline does not lead to success in business.


Knowing I had to do something ,and being a non-techie ,I started a practice which worked for me. Every night before I left work I wrote a list of all the things I needed to do the next day. I placed it front and center on my desk so it was the first thing I saw in the morning. As I completed items on the list I'd cross them off with the fattest magic marker I could find. Most days, other things came up and not all the items were completed, but every time I made a slash with that marker, I felt a sense of accomplishment. I found that the least pleasant tasks often made it to the list for days on end and sometimes spilled over to the next week.


One day in the nineties I attended a seminar . The speaker talked about lists like mine - but with one difference. He called it "Eat the Frog". I can't remember the guy's name or even where the seminar was, but I don't want to take credit for someone else's idea. It is so simple:


Say you have a list of things to do today and one of them is to eat a frog. Instead

of putting it at the bottom of the list, eat the frog first. Everything else you do that day will seem like a piece of cake. I started using that method and it made an incredible difference in my work and home life.


I promised myself that I'd continue to use the lists in retirement and for the most part I have. I stopped altogether on my recent trip out west. As a result, I probably wasted more time on the computer and just wandering around than I have in years. I was even less diligent with the crossword puzzle. Now I'm back home and back on track with the lists. I think they may be more important to me now that I have total freedom to use my time as I wish. There is nothing earth shattering on my lists but what's there keeps me focused and prevents wasting precious time. I finished today's list by 3:30 - so I rewarded myself by sitting in a chair watching Jeopardy. Here's tomorrow's list:

No frogs on this list - but I'll sure enjoy the beach a lot more if I do the other things first.

Things I Love about Chicago - and Missed Most While in Tucson 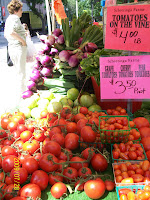 Things I love about Tucson 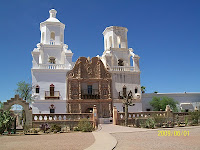 College Softball: I am sitting in the 107 degree heat in Tucson watching the U of A girls softball team (on TV) playing UCLA (Boo-Hiss) for the world series of college softball. I love the coach Mike Candrea - he has such a visible respect for his players and they respond well to him. No nonsense discipline and solid coaching help these young ladies succee

d in softball as well as life. He (and the other college coaches) should probably hire a fitness coach to ward off big butts, bellies and other signs of unhealthy physical profiles. Seems I remember when my girls played softball, they were in much better physical shape with bodies that looked as good in prom gowns as in sports uniforms.

NFL Hockey: I admit it. I love John Mc Donough. My husband is aware of this affair. We both loved John when he was with the Chicago Sting (soccer) and I was the Marketing Director at Pioneer Bank. We have a picture of our daughter Kelly with Pato Majetic in the bank lobby. We watched the S L O W games at the old Cominsky Park and the amazingly fast ones at the Chicago Stadium (indoors). We discovered WeissBier at the Weink

eller after those games.
We loved what he did with the Chicago Cubs and how he made Wrigley Field even more of a destination than it already was. He remained a modest gentleman. I was sad when he left the Cubs to go to the Black Hawks = but Ohhhhh =- what a success story. Butts in the seats is what it's all about and John does that best. He delivered . He addressed our U of A alumni association in Chicago and I was proud to be one if his friends and to be there with him.He's a real class act. I hope Rocky Wirtz gives him a lifetime contract. He deserves it. AND - try and find some "dirt" on him. It doesn't appear to exist. Love you, John.


Back to the Chicago Black Hawks. We have grandsons who are in love with hockey and who will watch the finals with great interest. Back in the day when we were NY Rangers fans, the games ended in April . There were only 6 teams and we breathed it all. Now, I'm glad my kids' kids have adapted to the longer season. I don't breathe it, but I am rooting for the Hawks, the Lady Wildcats and the decent people in sports, like John Mc Donough and Mike Candrea.


As a finale. I want to salute the young father who spent most of his day off today teaching his 6 year old to swim our lap pool. He encouraged, he demonstrated, he asked his son to respect 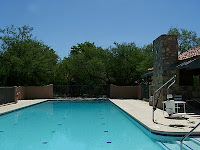 those of us at the pool who were reading. He is a professor at the U of A and the son-in law of one of our neighbors. He was teaching his son swimming, familial loyalty, community manners and social graces. I love him as well. Mas abrazos amigo. We need more heroes like these guys.
FIND YOURSELF SOME HEROES.
Posted by LSC at 9:19 PM 4 comments