My Apologies to the Polar Bears 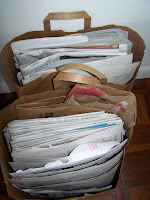 We are not fanatics about the environment, but we try to do our share.  We clutter our front hall with newspapers in recyclable bags until one of us gets motivated to haul them down to the basement recycling bin.   We faithfully rinse and recycle glass, aluminum and plastic in the trash room containers. We carry Trader Joe's reusable grocery bags on shopping trips and I use the backs of  used envelopes for notes.  Those of you who knew my mom - knew the history of her life could have been reconstructed from notes on the backs of envelopes.

Today I drew the line on what I'm willing to sacrifice for the better good.  I refuse to go blind trying to use light bulbs that take forever to get bright and then are still too dim to read or cook by.  Besides, one of them just burned out -years before its heralded  end of life. Although I have recently sworn off cooking, I still need to use a knife in the kitchen ( those limes for my cosmos don't come already cut, do they?)   and I really don't want to mistake my index finger for a stalk of celery. 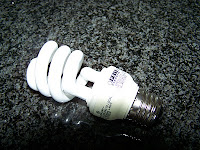 I found that in order to see what I'm doing with the new early darkness I needed ,in addition to the overhead light with the energy saving bulbs, the halogen lights over my island and under my cabinets plus the hall light. I think I spent more energy on those than I saved with the dim-wits in the ceiling. It is now nearing darkness and  I switch on the ceiling light with the newly installed old fashioned light bulbs.  I can actually see in my kitchen.  So with all due respect to Al Gore, the EPA and my friends in Antarctica, I'm sticking with what works for me.
I look forward to tomorrow morning's crossword puzzle - I think I'll be able to read the numbers without a flashlight.

Delete It From My Profile - and I Mean NOW.

Every time for the last 70 years that I've had to fill out a form which includes interests, hobbies, favorite activities or passion, I've always said the same three things "reading", "writing", and "cooking".  Depending on the stage of my life the lists may also have included, canoeing, swimming, hugging my babies, making my business goals,  entertaining, dancing, frat parties, , - you get the idea.

In college I clipped recipes even though there was nothing to cook on in the dorm but our iron.  I was creating a  "portfolio" for my expected marriage - the goal of every 50s co-ed.  As a young wife I raided the recipe files of my mother and mother in law. I still have many of them.  Living in Tucson I learned to love Mexican food.  Moving to New Jersey after graduation left me with no Mexican restaurants, so I was forced to learn to cook Mexican from my husband's engineering prof's cookbook.  I love it to this day.

In the Chicago suburbs we  became part of a group who held neighborhood dinners and I learned to cook "faux gourmet" - Oven roast some chicken, throw a can of black cherries on it and  garnish with mandarin oranges.  Then there were family dinners.  Cooking for eight was fun and probably guided by what was left in the cupboard a few days before payday.  Some of my most creative cooking happened here. Think Girl Scout Stew and Pork Chops with Sauteed Apples. Don't forget the forays to the Hostess and Wonder Bread outlet.

I've always fancied myself as a good cook - and sometimes it was true.  More often, my kids, all of them, can outcook me.  My friends go to cooking schools in Italy, France, Napa Valley  and Santa Fe.  I just keep plugging.  Damn the Farmers' Market.  Last week the eggplant looked sublime with its maroon, silky presence.  How could I resist?  Moussaka calls.  Three @#%$#^&- hours later I had enough moussaka for a planet - with only two diners involved.  Holy Leftovers!

Today it was stuffed peppers.  Great shapes, easy to stand up in a baking dish, no wax from the warehouse. 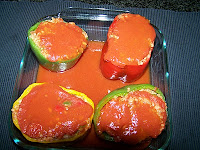 I could have read half my really great  book in the time it took me to chop, brown, saute, mix, parboil, fill, sauce, bake and baste this baby.  It tasted great - two of them are leftover.

I AM DONE.  Next time I want a great meal, I'm going to  one of my  kids' houses or to Trader Joe's ready to eat section.  Life is too short and I have a lot of books to read and sights to see. And I live in one of the great food cities of the world.

Good Book - Don't Forget to Check it Out.

Some family members and many of our friends are dealing with loved ones suffering from various forms of dementia.  At my age, I and many of my friends deal with forgetfulness on a daily basis.   I am constantly searching for keys, glasses and other objects and they're usually right where they belong.  Now that I'm retired, I often find myself having to look at the newspaper to be sure I've got the right day and date.  I spent Friday of this  week thinking it was Saturday and all day yesterday I was sure it was Sunday. Now I feel like today, Sunday, is a bonus.  And so it goes for us aging members of society.  Thank heavens for my calendar to remind me of important events - and hopefully I'll continue to remember to look at it every morning - so I'll know where I'm supposed to be.

I recently read a very good book, Still Alice, by Lisa Genova.  It's fiction, but written by an expert in the field of dementia and Alzheimer's.  Written in the voice of the person who is afflicted with Early Onset Alzheimer's it makes a compelling read.  I struggled through the first dozen or so pages - as too obvious - but soon after, I could not put it down.  I highly recommend it as an addition to your reading list.

As a footnote, the friend who recommended this book to me, forgot she recommended it.  I in turn, forgot to check it out of the library until I ran across my notes from Tucson in my calendar.
Posted by LSC at 11:20 AM 0 comments

I was going to submit a photo to the Red Eye's photo contest - this week entitled "September".  I grabbed my camera and went out on a quest for a winning photo.  I soon realized that September cannot be captured in one photo.  Over my lifetime, it has meant many things.  This September it brought me a reason to evaluate.

Yesterday I received a phone call informing me that one of my favorite sisters-in-law, Joe's sister, Jeanne ,had slipped away into the hereafter in her early morning sleep - a release  from her suffering and frustration.  In her nearly 85 years she had lived an extraordinary life, leaving home in her teens during the depression, making a mark on the foreign service, becoming a world traveler and the single mother of  a bright and accomplished child.   I also received an e-mail informing me of a work colleague who had given birth to a healthy baby boy - releasing him into the world to make a name for himself in the future as Jeanne had in her life.  I wish him 80 plus years to follow in his parents' footsteps and become an extraordinary person. The cycle of life is still working.


September also is significant for many other reasons:
Happy fall.   Welcome Elias and Godspeed, Jeanne.  Another year begins. September is not so bad.
Posted by LSC at 10:11 PM 0 comments