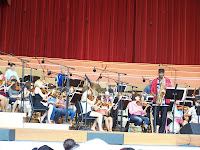 We spent a few pleasant  hours today at Millennium Park watching the Grant Park Music Festival Orchestra rehearse for tomorrow's  concert.  It is always fun to watch the musicians perform in their shorts and flip flops - knowing that tomorrow night's audience will see them in their casually elegant black and white ensembles.

We had a crazy mixed up summer, so this is actually our first time at the Pritzker Pavilion this year.  Hoping to make up for that from now until summer's end.   We've been enjoying the Grant Park Orchestra since the 1970s when it was a well kept secret over at the Petrillo band shell.  We could always spread out and enjoy the music, the wine and the food.  That is kind of hard to do in the seat structure today, so these day- time rehearsals are very special in that they are not crowded and we can bring our lunch once again.

Today was not my favorite kind of music, but exciting nonetheless.  I always learn something new from the wonderful docents who speak during the union-mandated breaks in the action,  Today I learned the difference between a soprano and a tenor saxophone.  That being said - saxophone music is an acquired taste.  Many of the others there were really into it.  I was listening and reading my New Yorker.  I stopped to watch when the famed solo sax player, James Carter joined the orchestra.  He is not only a good musician, but a showy performer, moving with ease between the tenor and soprano saxophones before him.

After the rehearsal, we stuck around and were lucky enough to see the Detroit born Carter, Roberto Sierra, the Puerto Rican composer who wrote the Concerto for Saxophones And Orchestra, and Carlos Kalmar, who was raised in Uruguay and is our Principal Conductor putting their heads together.  It was a very spirited conversation and I would love to have been a fly on the wall as they discussed the performance of the piece.  Smiles all around. 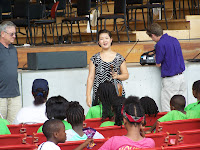 A large group of Chicago Park District day campers joined the audience when the soloist took the stage.  They were extremely well behaved youngsters and appeared to enjoy the music.  When the rehearsal ended, a trumpet player and a violinist from the orchestra came down to the seating area and held a lively,  interactive  session with the kids, talking about the orchestra, the study of music and their own special instruments.  That made for a  heartwarming and uplifting end to a pleasant visit to the park.
Posted by LSC at 4:36 PM