Not to be confused with Locks Disease

Keys Disease (Clavis Morbus) is an infectious, but rarely fatal, disease affecting humans ( homo sapiens). It is believed to be air borne.  In some instances felines (cats) especially the feral variety are affected by or may be carriers of the disease.  The infection causes several days of euphoria and high excitement, followed by malaise and an indifference to time commitments and obligations. 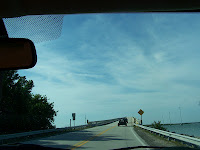 Keys disease is a severe plague on organized activities and the ability to move projects ahead at any rate of speed.  In its most infectious state it is capable of totally destroying the concept of a deadline.  Most susceptible to contamination are boaters, fishermen, sunbathers, lap swimmers, conch lovers and just about anyone who wanders below mile marker 126.5 on the Overseas Highway, also known as U.S. 1 in the farthest southeast reaches of the United States.

Ocean breezes. intense sunshine, abundant fishing and a party atmoshere are thought to cause Keys Disease.  Some researchers are studying the part that coral reefs may play in the proliferation of the disease.  Although there is evidence that Native Americans came to the Keys as early as 3000 B.C., it was not until the 16th century that others arrived there.  The first settlers were Spanish fishermen who came from Cuba, a mere 90 miles to the south.  There is no documentation of Keys Disease in those early days.
The earliest symptoms can be traced back to the days of Ernest Hemingway.  Many of those affected have outward symptoms of "Hemingway Wannabe", which is most often contracted by over the hill retired men from the Midwest. Other symptoms include uncontrollable urges to sing "Wasting Away in Margaritaville" with a longneck in hand and a plate of deep fried something or other in front of you. 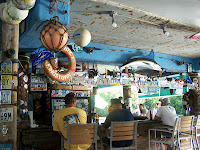 Treatment must take place on the mainland.  There is no effective way to fight Keys Disease while actually in the Keys.  For short term treatment, a trip to the craziness of Miami traffic may provide temporary relief. 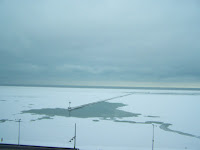 Long term treatment must involve travel to the North or Midwest, preferably during a snow storm, and for longer lasting results, a blizzard.

Unfortunately, the only permanent cure for Keys Disease is abstinence from travel on the southernmost reaches of U.S. 1.

Fortunately, since the disease is not fatal, periodic travel to the Keys is not physically or mentally life threatening and may, in fact, prolong life for those who expose themselves prudently.
Posted by LSC at 9:24 AM